Tegenungan Waterfall is one for nature lovers who happen to be staying in Ubud or have neighbouringSukawati among their tour itineraries. The falls are conveniently located half way between Ubud and Bali’s provincial capital of Denpasar, and is considered the closest natural attraction of its kind that you can reach within only a half-hour transfer southeast from Ubud town. Getting to the falls is a pleasant drive down paved village roads lined with stretches of green rice fields on both sides.

The Barong is the magical protector of Balinese villages. As & lord of the forest with fantastic fanged mask and long mane, he is the opponent of Rangda the witch, who rules over the spirits of darkness, in the never ending fight between good and evil. During the GalunganKuningan festivals, the Barong (there are many types, including barong ket, barong macan, and barong bangkal) wanders from door to door (nglawang) cleansing the territory of evil influences.Barong and Kris dance like the kecak dance the Barong and Kris dance is a battle between good and evil spirit. Barong can take various forms but in this dance he takes the form of the dance Barong Keket, the most holy of the Barongs. The Barong Keket is a strange creature, half shaggy dog, half lion and is played by two men in much the same way as a circus clown-horse. His opponent is the witch Rangda.

Bali Celuk Village is a traditional village located near to Ubud in the Gianyer Regency where you can appreciate the mountain culture which in many ways is similar to that of the traditional areas of Ubud and the other surrounding villages except for one major factor, Celuk Village is famous for the incredible gold and silver handicrafts which are available around this area for very low prices.In the Sukawati area you will find that the craftsmen are of a very high standard and you can barter over these goods or even buy in wholesale capacity. As well as the shopping opportunities there is a lot to see around Celuk Village and the culture of the area is fascinating as well as relaxing to see where the pace of life is slow and you will find some interesting characters as well as plenty of place to try the local dishes and international dinning. There are some other attractions as well as in the area as well as a number of facilities and hotels which are usually top end or midrange boutique little places hidden away in the village.

Goa Gajah Elephant Cave Temple or better known as Goa Gajah is the name of a place with the archeological heritage in form of a cave ornamented by the beautiful relief on the outside wall of cave. This place is formerly as a park, a place of retreat for Shiva Priest and Buddhist monks. Goa Gajah is located in the west side of Bedulu Village, Blahbatuh District and Gianyar Regency which is about 27 km from Denpasar City. This cave is built on the brink of a meeting between two small rivers those are called by Kali Pangkung then it water mixing with Petanu River flows under it. The meeting area of two rivers is called by Campuhan/mixed which is deemed to have a magical power based on concept of Rwabhineda (two differences).

The Ubud Monkey Forest lies within the village of Padangtegal, which owns it. The village’s residents view the Monkey Forest as an important spiritual, economic, educational, and conservation center for the village. There are many of point of interest that you can see here. Other than around 700 monkeys, you also can see 186 species of trees in 12.5 hectares of forest, where will allowing you to get an abundant of fresh air. 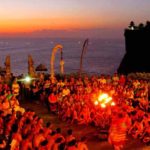 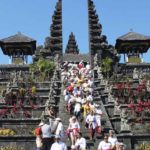 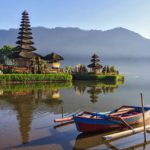