Tukad Cepung Waterfall has mesmerized everyone who have managed to spot it. Well-guarded by the cliffs, this waterfall is difficult to locate for the first time visitor. A few hundred stairs down the cliff is worth the effort once you arrive at the destination. The circular cliffs give you the feeling of being in a cave, while the open sky right from where the waterfall emerges, gives you the most enchanting view. The sunlight falls on the glistering waterfall creating a rainbow, which feels as though it is projected right up to you. If you have never seen water flowing from the sky, then this would be your chance. Unlike any other waterfalls in Bali, Tukad Cepung Waterfall does not flow into a river, stream or jungle, but it flows gently down the cliffs. The river can be seen from up above, meanwhile the waterfall can only be viewed once you walk down the stairs and into the cliff.

Penglipuran village is a beautiful highland village in the regency of Bangli in East Bali, best known for its well-preserved culture and village layout. While most of its residents have embraced modernity, its individual compounds are well-kept to look traditional with visitors in mind, with manicured gardens lining its single linear stone-paved street that runs through the centre of the village toward the village temple, and age-old arched entrance gates and walls that conceal their houses within.

Kehen Temple is an ancient Hindu temple complex boasting unique architectural features. The temple courtyard is reachable from ground level up a flight of 38 stairs, with carved sandstone mythical animal and Balinese folklore figure statues around the staircases and the central vestibule. The temple’s walls are also ornate with Chinese porcelain plates, which are a tribute to the historical relations between the local Bali kingdom and China.

Goa Gajah Elephant Cave Temple or better known as Goa Gajah is the name of a place with the archeological heritage in form of a cave ornamented by the beautiful relief on the outside wall of cave. This place is formerly as a park, a place of retreat for Shiva Priest and Buddhist monks. Goa Gajah is located in the west side of Bedulu Village, Blahbatuh District and Gianyar Regency which is about 27 km from Denpasar City. This cave is built on the brink of a meeting between two small rivers those are called by Kali Pangkung then it water mixing with Petanu River flows under it. The meeting area of two rivers is called by Campuhan/mixed which is deemed to have a magical power based on concept of Rwabhineda (two differences). Based on this concept seems Goa Gajah is intentionally built in two rivers. 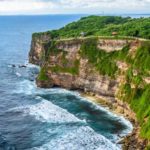 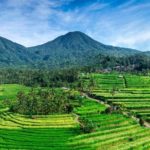 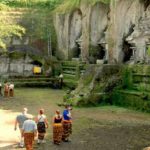